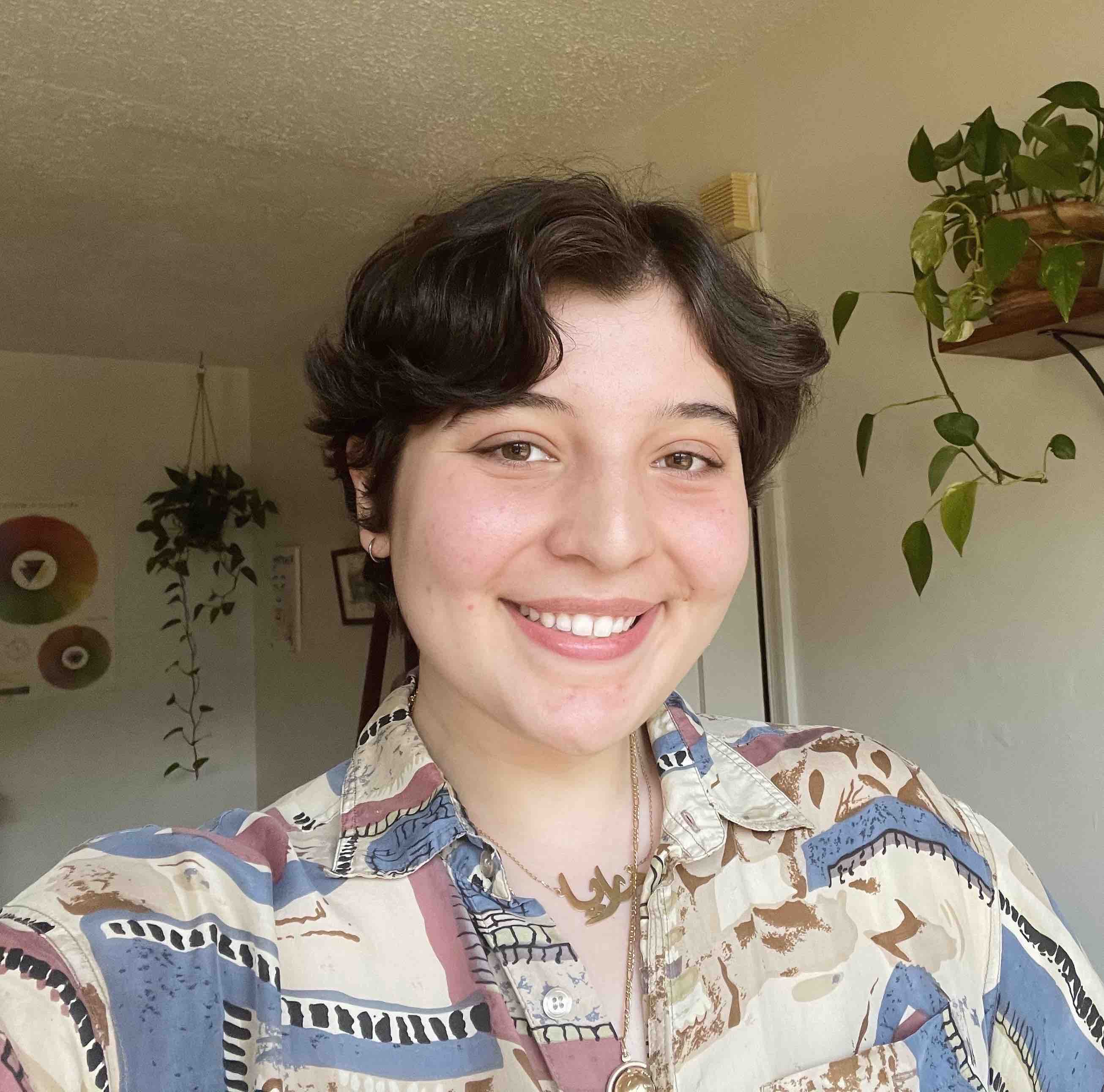 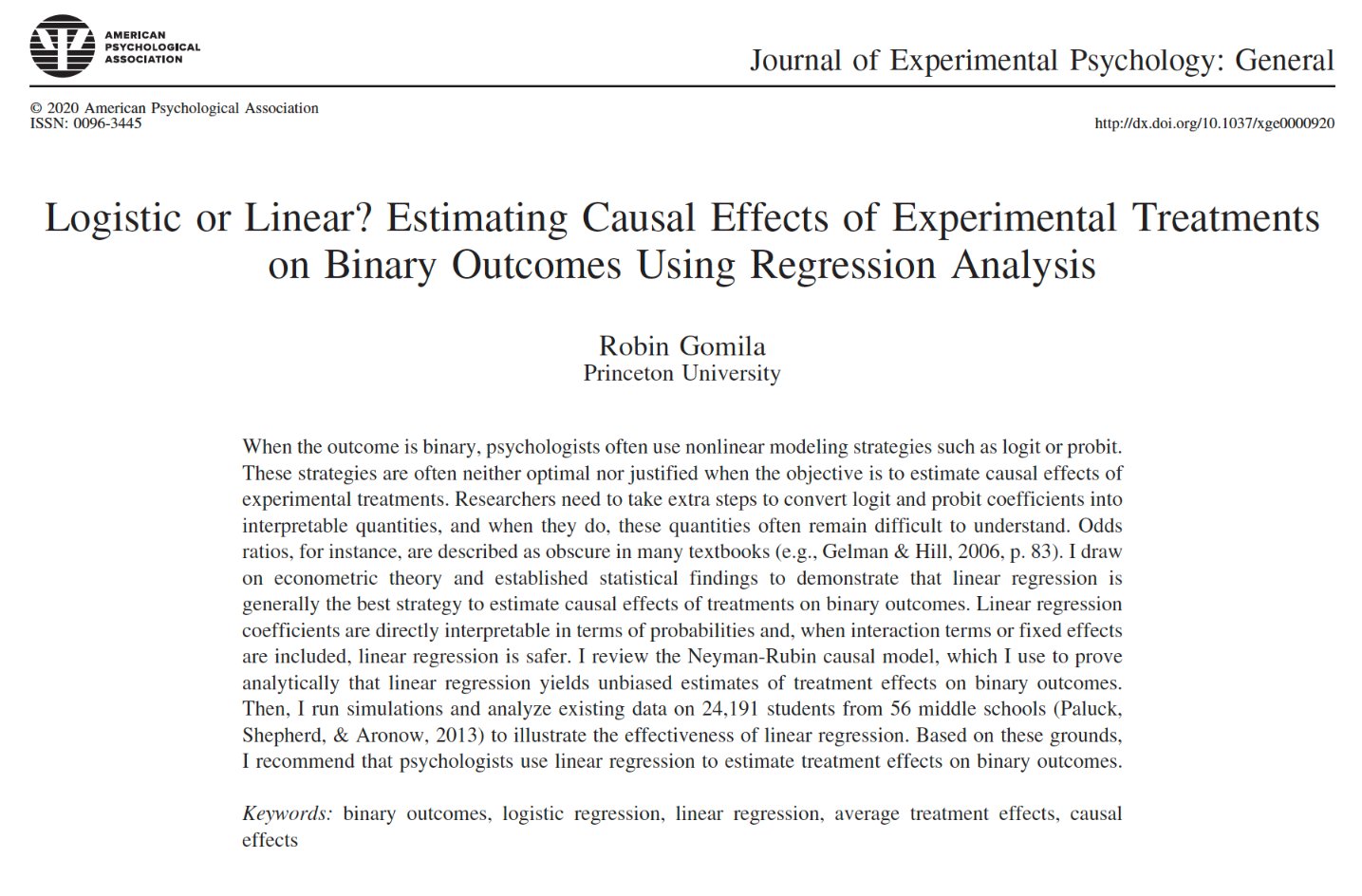 A summary and some questions for group discussion.

A lot of psychology research uses binary dependent (or outcome) variables, such that responses are either 0 or 1. The paper lists social psych examples, but pretty much anytime a cog psych experiment measures accuracy on a trial-by-trial basis, it’s done using a binary outcome. It’s basically dogma that when you have a binary outcome, you use a logistic regression (or logit model) rather than a linear regression (or linear model; which is used for continuous variables). Some people use probit models to analyze binary outcomes, but I’m of the understanding that it’s more commonly used when your outcome is ordinal but not quite continuous/linear (e.g., confidence ratings on a scale of 1-4). But it’s been argued that even 7-point Likert scales commonly treated as continuous in psych research should be analyzed with probit models.

The difference between linear, logit, and probit models is the link function. Link functions transform the outcome variable to a continuous scale, allowing the predictors and response to be modeled with linear regression. But when you move to the other side of the equation (i.e., applying the inverse link function), then your coefficients are transformed to the outcome scale of interest. The inverse logit takes a continuous number (log odds) and converts it to a probability. The inverse probit function is just the density function of a normal distribution – it converts a normally distributed latent variable to a probability.thanks Kevin

1. Nonlinear models are necessary if your goal is prediction

The most popular argument for using these models for binary outcomes is that they constrain parameter estimates between 0 and 1. If a researcher is interested in predicting the likelihood that someone does something, it helps to have coefficients that are directly related to the behavior of interest.

Horrace and Oaxaca (2008) showed that bias and inconsistenty of an estimator increase with the proportion of predicted probabilities that fall outside of the interval unit.

That is, the variance of the error term for binary outcomes is unequal for all values of X. This biases the standard errors of ordinary least squares estimates by placing too much weight on some portion of the data.

Just how relevant are these concerns for psychology research?

The coefficients of nonlinear models are never directly interpretable. But even after transformation (e.g., going from log odds to odds ratios), most researchers don’t have a clear sense of precisely what an odds ratio represents. Or if they do, it is cumbersome and difficult to communicate effectively. Gomila argues that this shifts the focus of analyses to statistical significance instead of effect size, which is a more robust and informative metric of your target estimand (or quantity of interest).

When your target estimand is the causal effect of a treatment on an outcome variable, the coefficients obtained via linear regression are directly interpretable as changes in the percentage points of the probability of observing the outcome. Let’s look at equation 3 to see how this is true:

where i denotes individuals and D denotes treatment. In this setup, when you are regressing a binary outcome onto a binary treatment, the average treatment effect is equal to Bi directly expressed in terms of probabilities. Gomila does not give any more detail than this, so someone with a stronger math background than me should explain to us why this is true.

Author notes: Is this news to anyone else? Does someone who knows more want to tell us why this is true only for nonlinear models?

Because logit models drop all observations that don’t vary in the outcome variable, using a fixed effects structure can lead to just as much bias as models that ignore the hierarchical structure of the data. But the opposite is true for linear regression–its performance vs. nonlinear models increases with the number of fixed effects.

Analytical evidence of the unbiasedness and consistency of the OLS estimator

This approach estimates causal effects in terms of counterfactuals (i.e., potential outcomes). This model accounts for the facts (1) that the effect of treatment can vary between individuals and (2) that you only observe behavior of an individual in one of the two conditions by comparing treated and untreated individuals and then adding in a bias term.

Di and Y0i are independent in experimental designs. Thus, we can express the average treatment effect (taui) as

This is usually referred to as the unconditional causal effect of the treatment, and Yi being binary has no implications for that; i.e., the outcome is unbiased and consistent.

There are 6 different binary variables for each the control (Y01i, Y02i, … , Y06i) and treatment (Y11i, Y12i, … , Y16i) conditions. The potential outcomes for each of these variables has a different baseline probability of success varying from 0 to 0.9. There are two covariates: X1, a binary variable indicating college degree, and X2, a discrete variable indicating religiosity on a 5-point scale.

Estimation of the average treatment effect in experiments

The randomized treatment has an average effect=.08, or 8 percentage points. After drawing several random samples & randomly assigning individuals to groups, you see that you obtain the same result using the linear and logistic regression models. 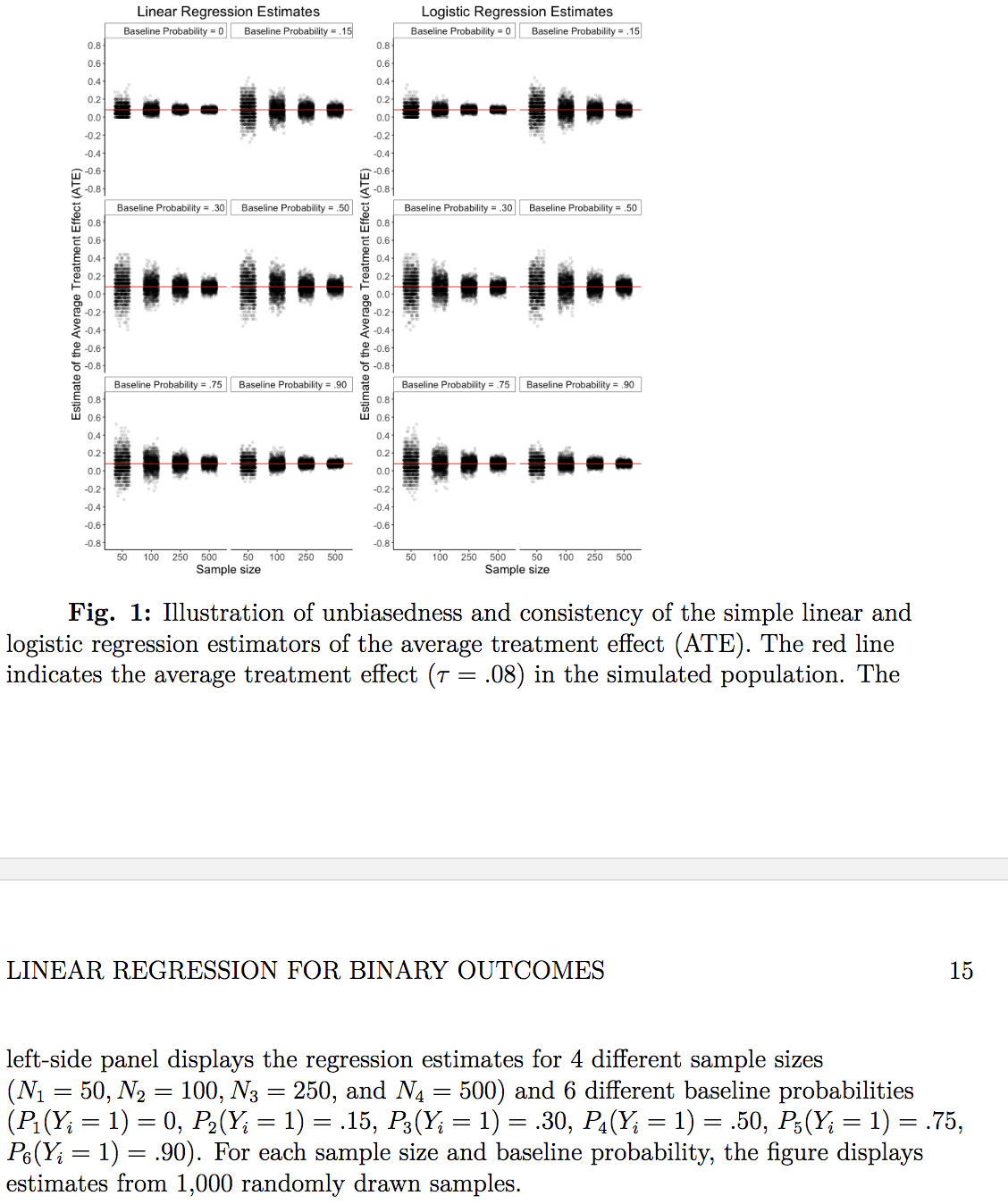 Estimation of the average treatment effect in quasi-experiments

Now we’re including our two covariates. The potential outcomes for both the treatment and control conditions were generated from a logit model that uses both covariates. Then random sample, random assign, and voila: 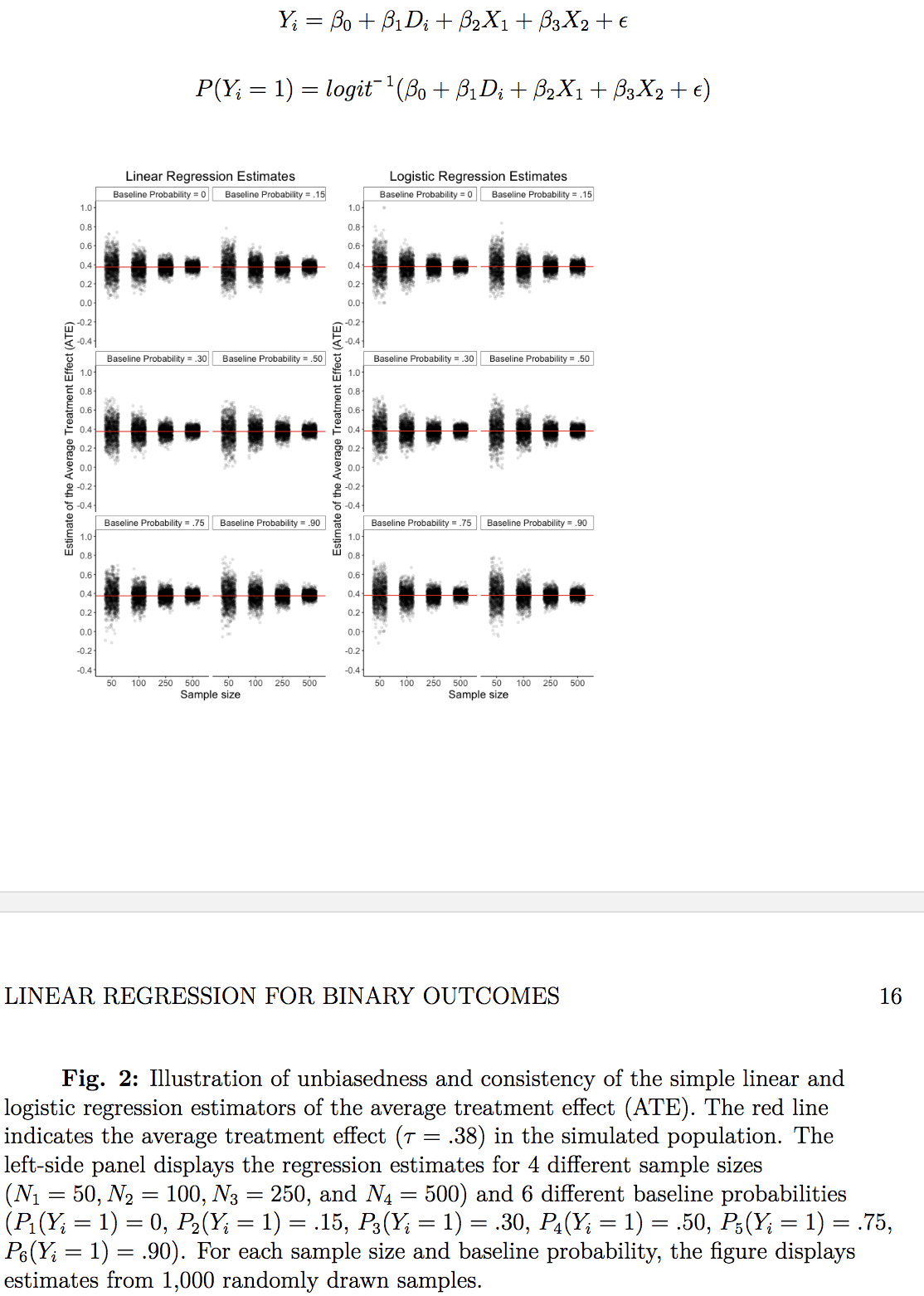 A field experiment examining the impact of an anti-conflict intervention in 56 New Jersey middle schools (n=24,191 students). Schools were assigned to blocks of 2 before being randomly assigned, within their block, to a treatment or control condition. The intervention lasted a year.

Selection of the variables and analytic strategy

Gomila chose 12 different binary variables with varying distributions. He compares the regression coefficients reported from the researcher to the probabilities derived from linear models, and does this for both pooled & nested effect structures. 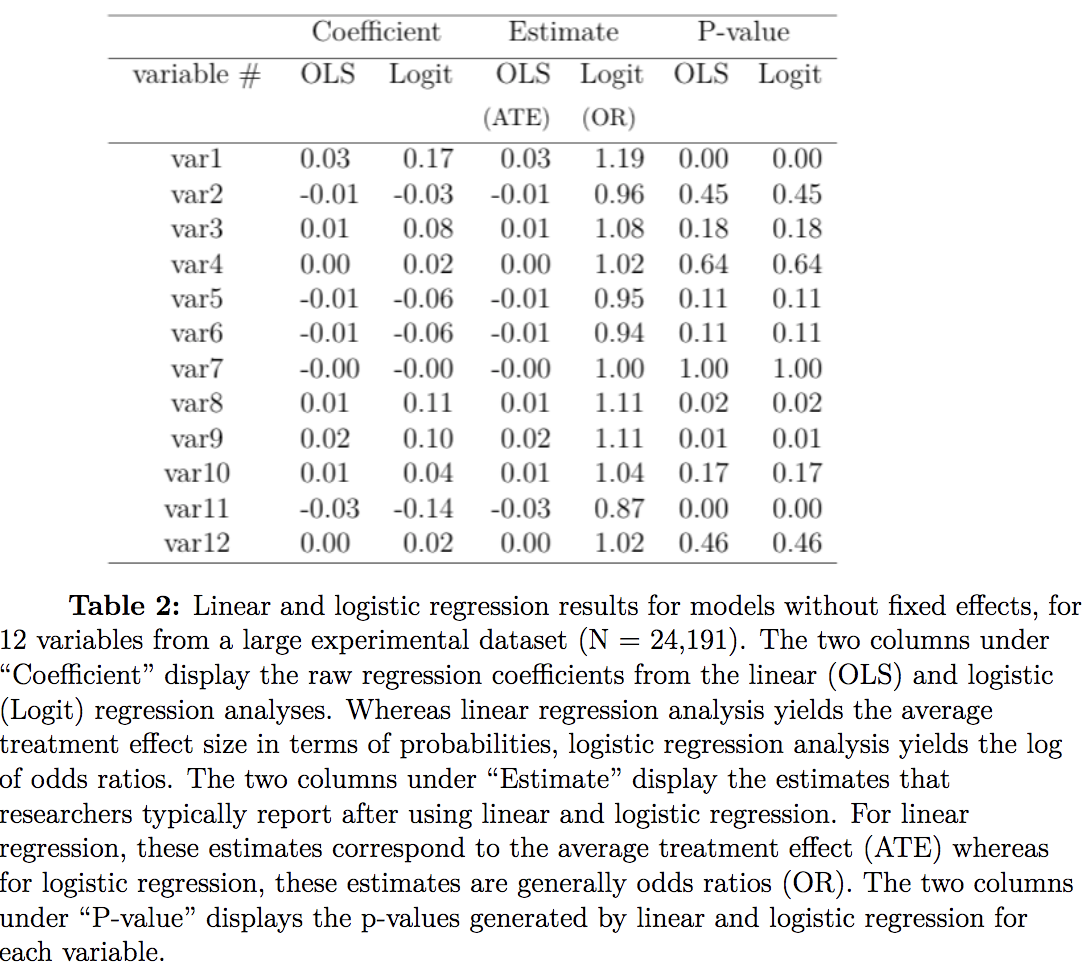 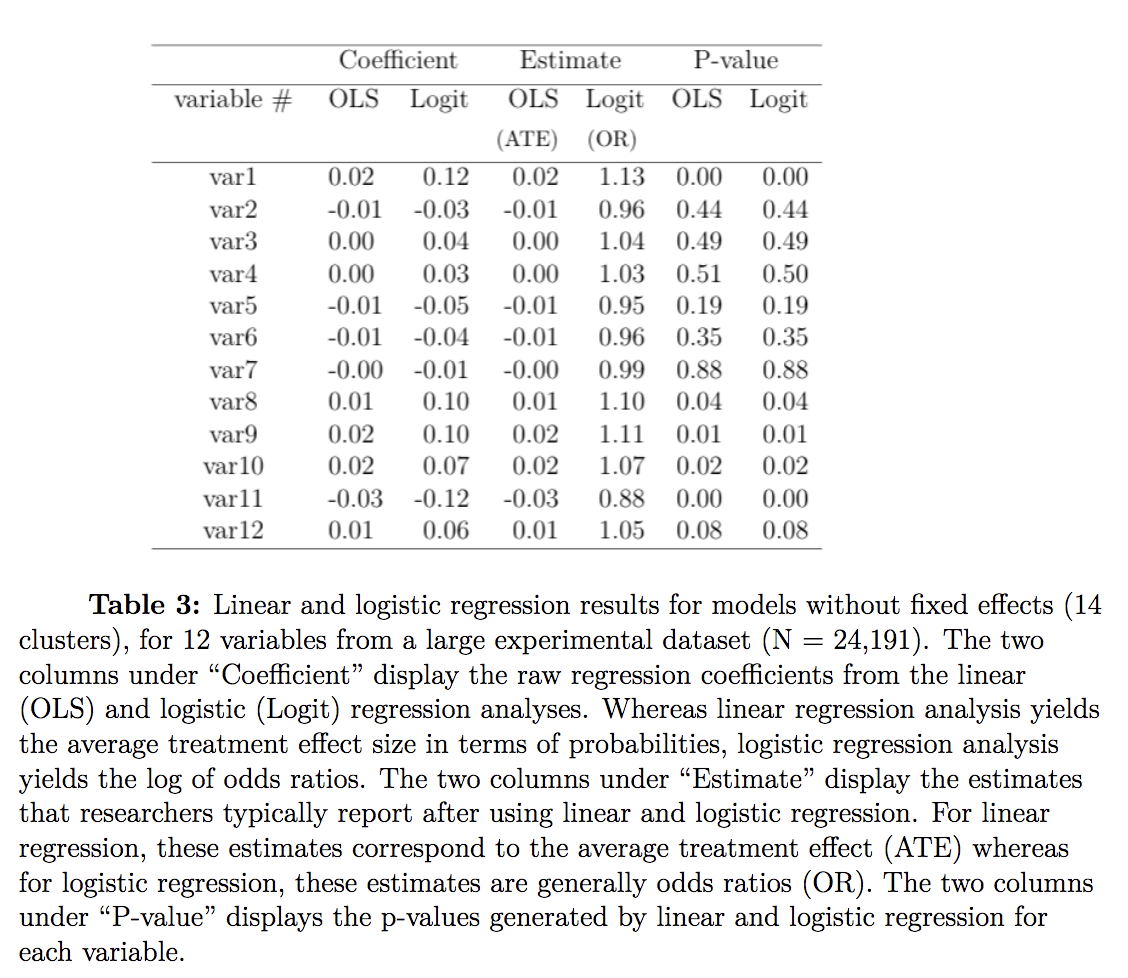 There is hardly a difference between linear and logit models. However, the equal performance on this dataset might not generalize to others. This one has small clusters and a large N, and the n in each cluster explains the effectiveness of logistic regression – logit performance can be expected to decrease as the ratio of observations to clusters decreases. 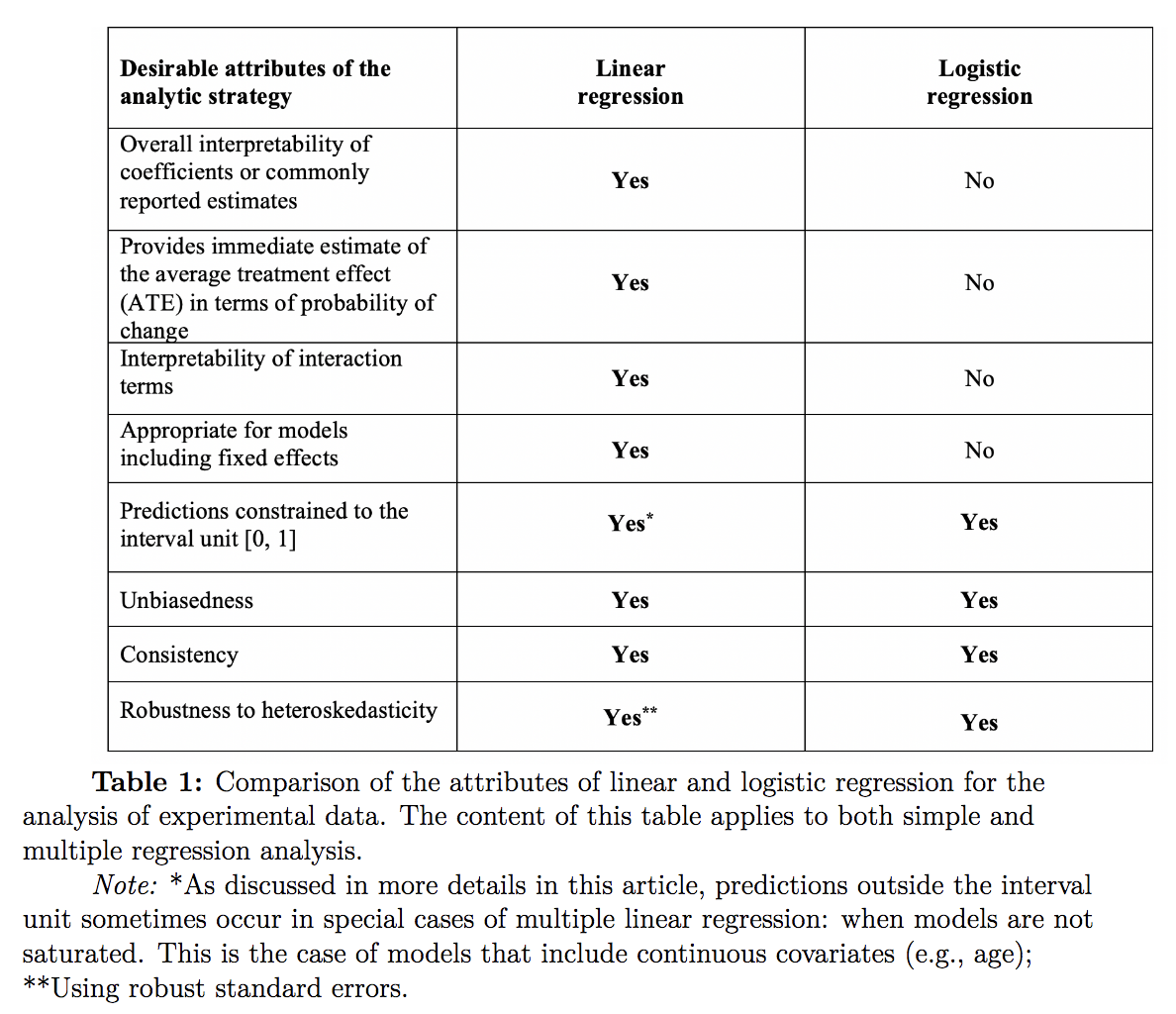 Given the similarity in performance but disparity in interpretability, linear models for binary outcomes are almost always preferred to nonlinear models. The only exception is when the model is not saturated, e.g., has continuous covariates. Gomila suggests that in this case a linear model is accompanied by a sensitivity analysis that analyzes the data with nonlinear models (logit/probit) or clustering methods (Bernoulli mixture models) to assess the robustness of the estimates.