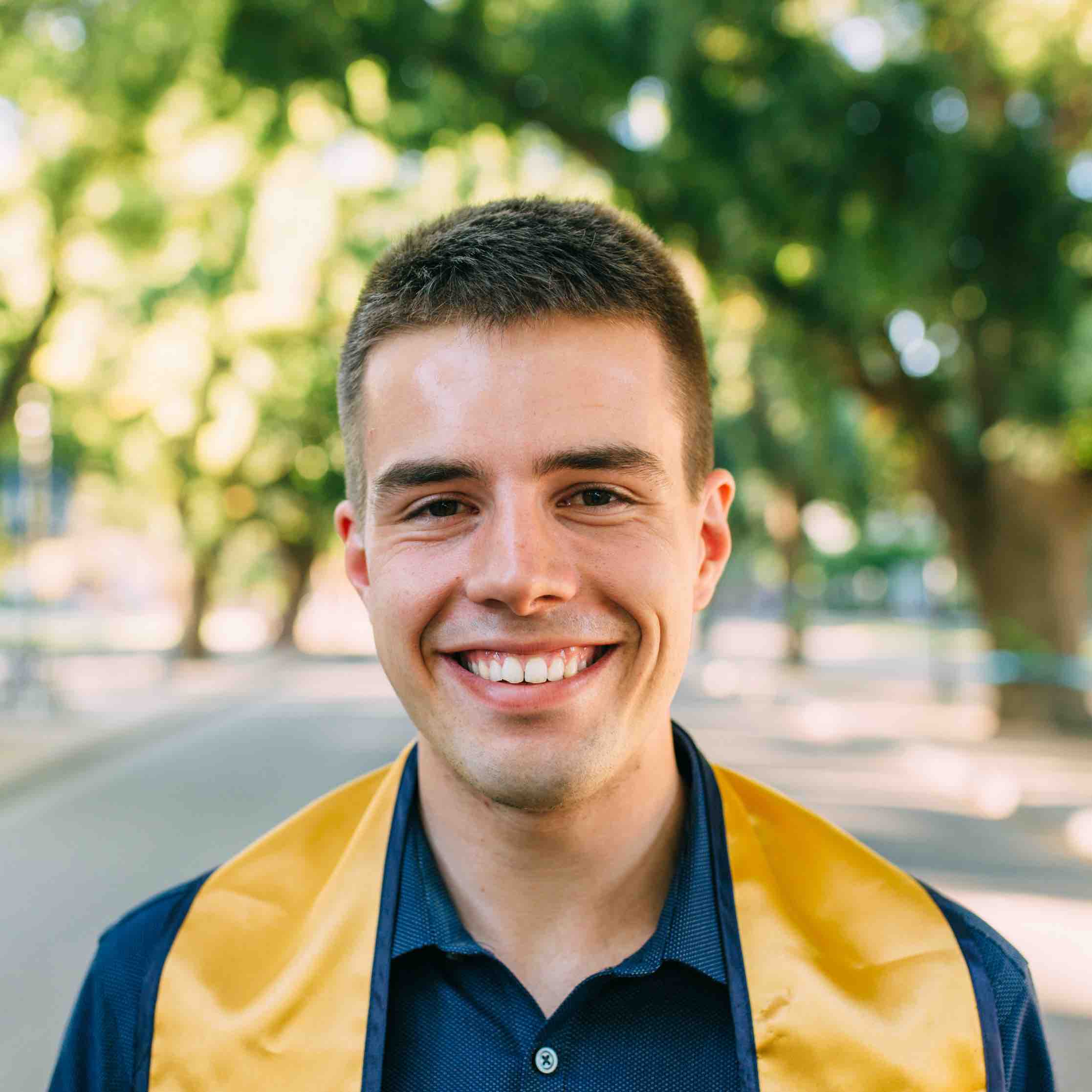 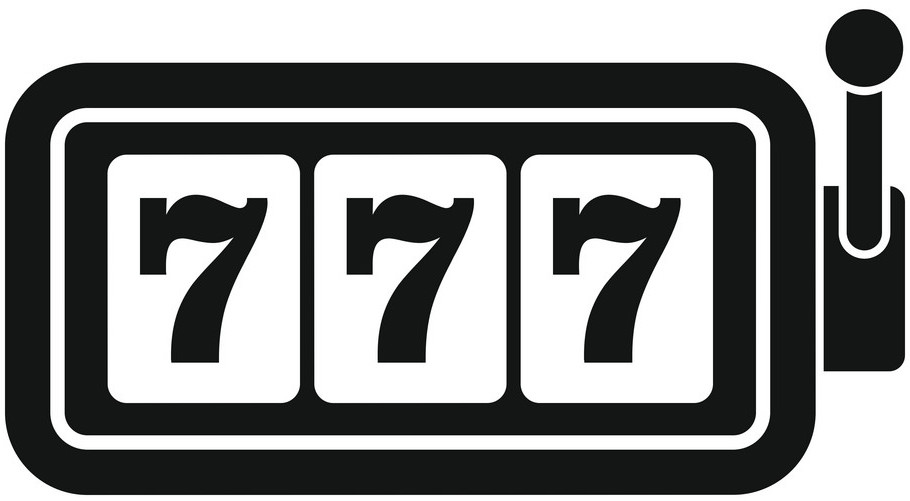 We will be programming our agent in R. We will start by initializing a few variables that describe our scenario. We can change these later to visualize different scenarios.

In order for our agent to complete this task, it first needs a way to represent how valuable it thinks each action is. We operationalize this with something known as a Q-value. A Q-value is a numerical representation of the expected average reward of an action. If an action gives a reward of $0 half of the time and $100 half of the time, its Q-value is $50, since on average one can expect $50 per action. If an action gives a reward 0 20% of the time and 1 80% of the time, its Q-value is 0.8. For now, we will initialize our Q-values for each arm at 0.5. With time (and rewards), these will be updated to approximate the correct expected rewards (i.e., the Q-values should equal to 0.7 and 0.3 eventually since our arms give reward = 1 70% and 30% of the time.).

Let’s initialize our Q-values for each arm at 0.5. We’ll also make a variable currentQs that will store the Q-values of each arm for the current trial (since these are needed to determine which arm our agent will choose).

Next, we need to determine what our action policy is. Given a set of Q-values, what action do we choose? For this tutorial we are going to implement something known as a softmax policy, which has a parameter beta known as the inverse temperature parameter.

Now, lets caluclate the probability of choosing each arm using the softmax equation:

First, let’s initalize the learning rate to some value. We can play around with this later.

Now that we have new updated Q values, let’s see how the probabilies of choosing each arm have changed!

As you can see, we are already more likely to choose the arm that currently has the higher Q-value. This way, we can balance exploration with exploitation. We will continue to pick the worse Arm occassionally, but we’ll also pick the better arm more frequently so that we can maximise reward in the long term.

Now, let’s simulate the agent performing the above steps over and over, 1000 times.

Great job! You should have created a new dataframe df that is filled with choices and rewards for 1000 trials (or how ever many trials you specified). Let’s visualize what happened in our simulation by looking at that dataframe.

Remember, our goal was for the agent to learn to correctly approximate the correct reward outcomes for Arm 1 (0.7) and Arm 2 (0.3). Let’s see what the Q values were estimated at in the last trial.

Not bad! Our agent’s most recent Q-values were fairly close to the correct values of 0.7 and 0.3. Of course, the reward outcomes are probabilistic so we are very unlikely to perfectly estimate the correct reward probabilities on a given trial. Let’s what the Q-values looked like over time as the agent performed the task: 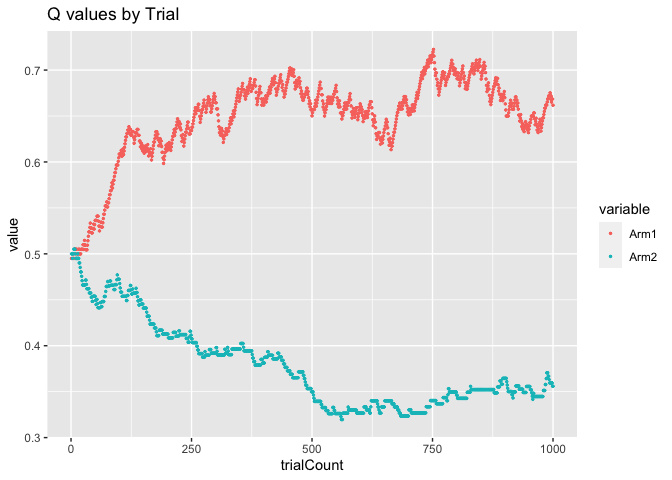 One think you might notice is that the line for the Arm 1 Q-values (red) is much more jagged and changing than the line for Arm 2 (blue), which is fairly smooth. This is because, remember, not only is our agent trying to learn the correct action probabilities, it is also trying to maximize reward. Thus, our agent is actually picking Arm 1 much more frequently than Arm 2 because of it’s higher Q-value. Let’s look at the arm probabilities as they evolved over time. 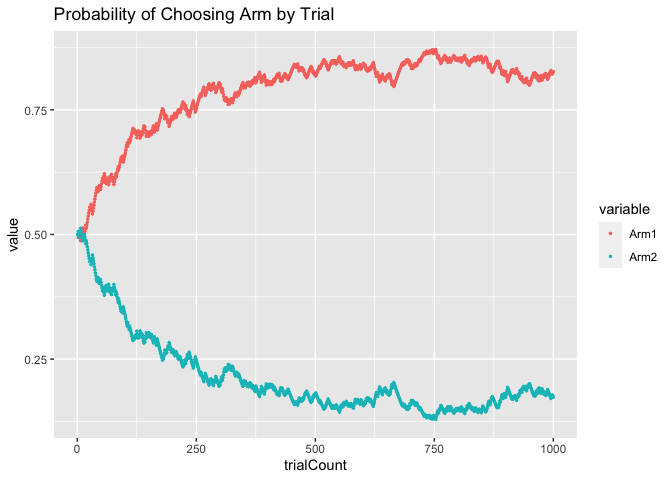 Next, let’s look at the choices the agent actually made. We’ll start by looking at the choices for the first 100 trials. Since we initialized both arms Q-values to the same value (0.5), initially our agent was fairly likely to pick both arms. We can see that below. 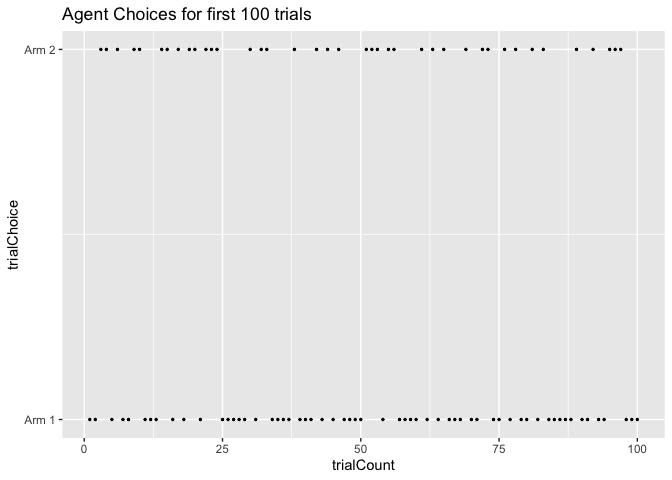 Now let’s look at the last 100 trials instead. By now, the agent has learned the correct Q-values of each arm and thus is much more likely to choose Arm 1 (Q-value = 0.7) than Arm 2 (Q-value = 0.3). How much more likely is determined by our inverse temperature, which determines how greedy versus exploratory our agent is. We picked a beta of 5, which is fairly greedy but accurate to how humans usually perform these tasks. Thus, we can see that in these trials our agent mostly picked Arm 1. 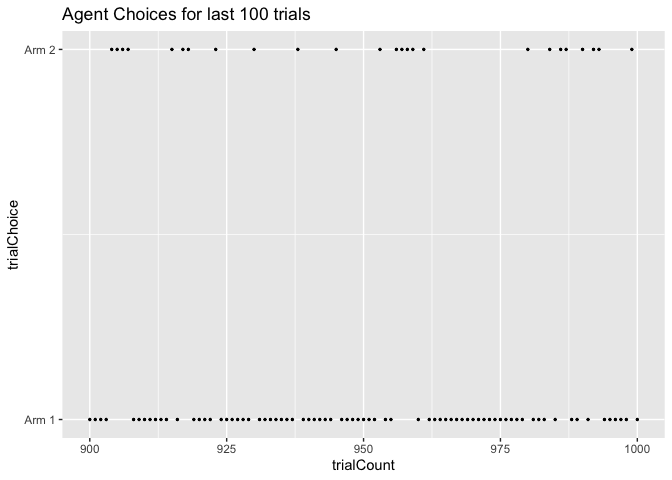 Now its your turn! Below is the identical code we just ran. This time, try changing 1 aspect at a time to see what the effect is. 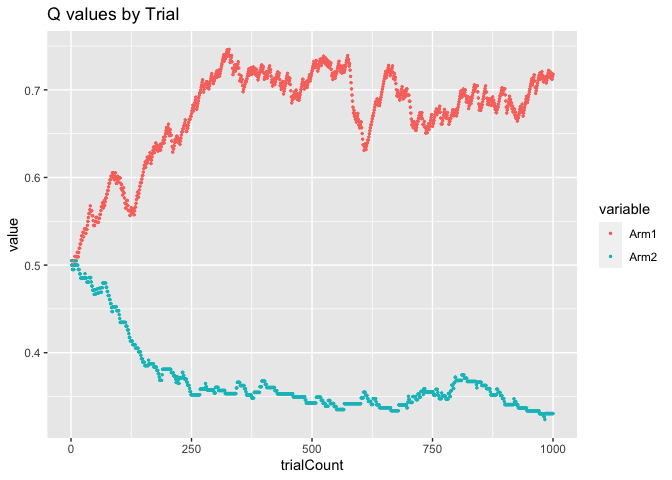 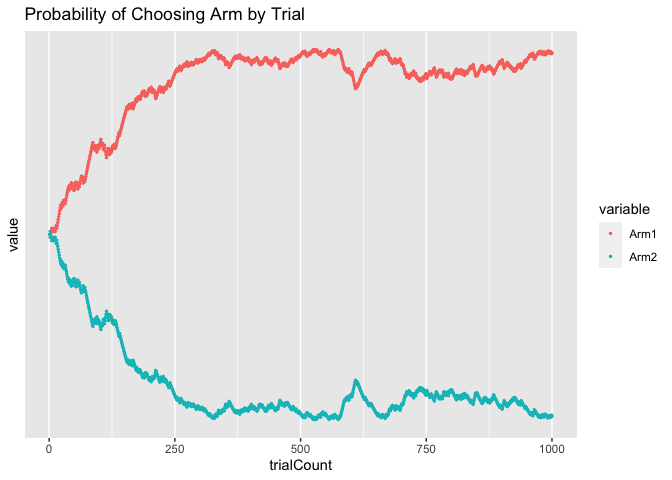 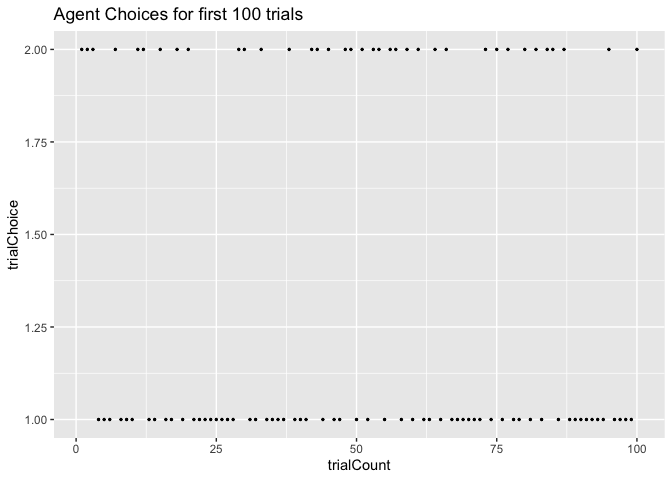 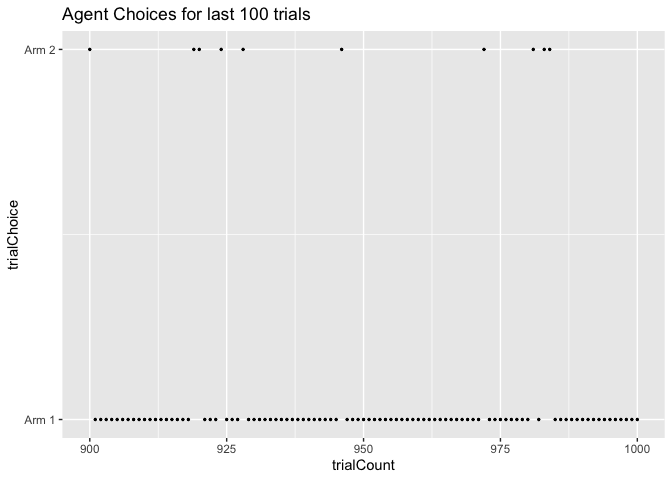 In the second part of this tutorial, we are going to perform parameter estimation on our simulated data. Given our data, we would like to estimate the learning rate alpha and inverse temperature beta that gave rise to that data. It is important to note that since both our agent and our bandit arms were stochastic (that is, probabilistic instead of deterministic), there is necessarily some noise, so our estimation cannot be perfect. Still, as the number of trials increases we will be increasingly be able to approximate our learning rate and inverse temperature.

Our goal in parameter estimation is to find a set of parameter values that maximize the likelihood of the data. In this example, we use stan to do that.

Stan will give you a lot of outputs and warnings, but that doesn’t necessarily mean that sampling failed! A full explanation of stan warnings is outside of the scope of this workshop, but you could check out this brief guide from the stan development team.

Now, we can check to see how well the sampling worked with some diagnostic plots: 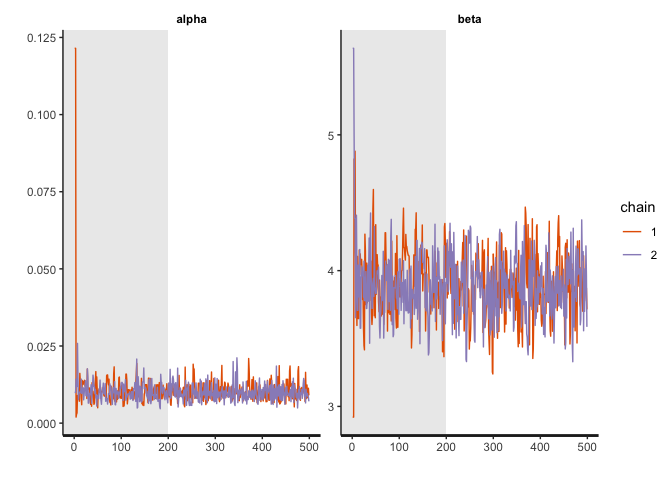 What we are looking for is a “hairy caterpillar.” After the warm up period shaded in light grey, the sampled parameter values should stablize.

We can also check the parameter estimates produced by the model. Note that the output is the posterior probability of the parameter rather than a point estimate. 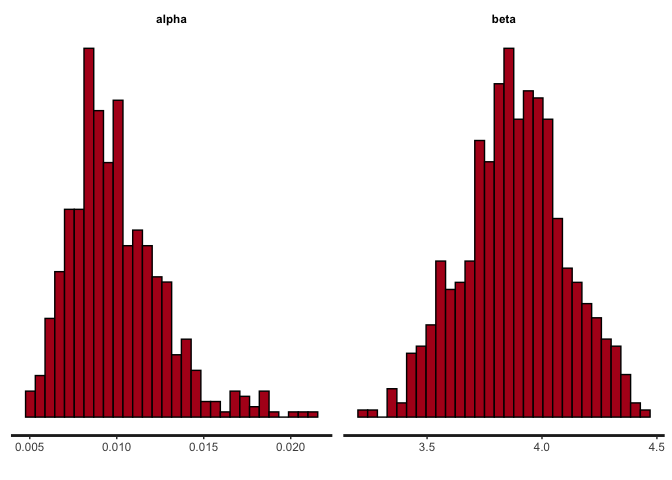 The center of the posterior probability mass should be pretty close to the ground truth parameter values in our data simulation.

There are generally two types of scientific questions we can answer with this kind of modeling approach. The first one is parameter estimation, which we’ve just covered above. By estimating the learning rate, we can answer the question of “How much does a subject update their beliefs based on feedback?” or “How likely is the subject to choose the best option? i.e. How greedy are they versus exploratory?”. The second type of question we can answer is model comparison. Different computational models, in effect, constitute different hypotheses about the learning process that gave rise to the data. These hypotheses may be tested against one another on the basis of their fit to the data. For example, we can ask whether a subject treated positive and negative feedback differently when updating their belief.

Now, we can fit the data to a second model that proposes two learning rates, and see which model produced a better fit in order to adjudicate between the two hypotheses.

Now that we have the model estimations from our second model, lets see what it estimates the alpha values to be. 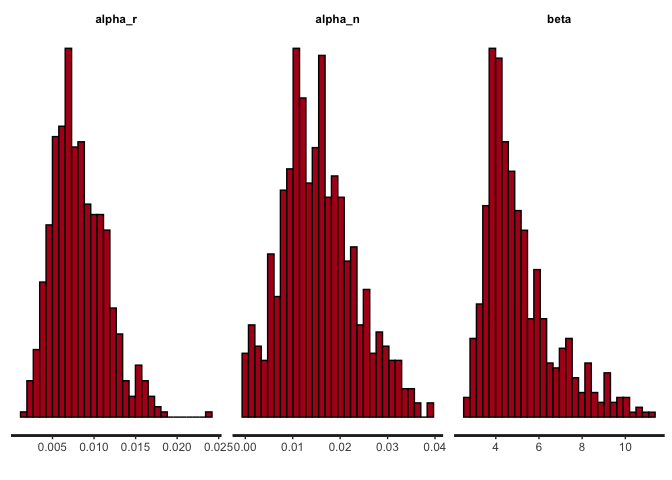 The posterior distributions for alpha_r and alpha_n are identical. This is because we set the same learning rate for rewarded trials and no reward trials (you could try changing the data simulation code to set different learning rates and fit the model again).

We will use the loo package, which carries out Pareto smoothed importance-sampling leave-one-out cross-validation, for model comparison:

If we had a well-specified model, we would expect the estimated effective number of parameters (p_loo) to be smaller than or similar to the total number of parameters in the model. Pareto k diagnostic values tell us that there are some bad k values, which can make the estimate for the Monte Carlo standard error (SE) of the expected log predictive density (elpd_loo) unreliable (see more information in this loo vignette).

Try simulating data with different payoff probabilities for the two arms, and see how well the model performs.

Try simulating data with a different learning rate or inverse temperature, and see how well the model performs.

Try fitting the model with a different initial Q value by changing the stan file.