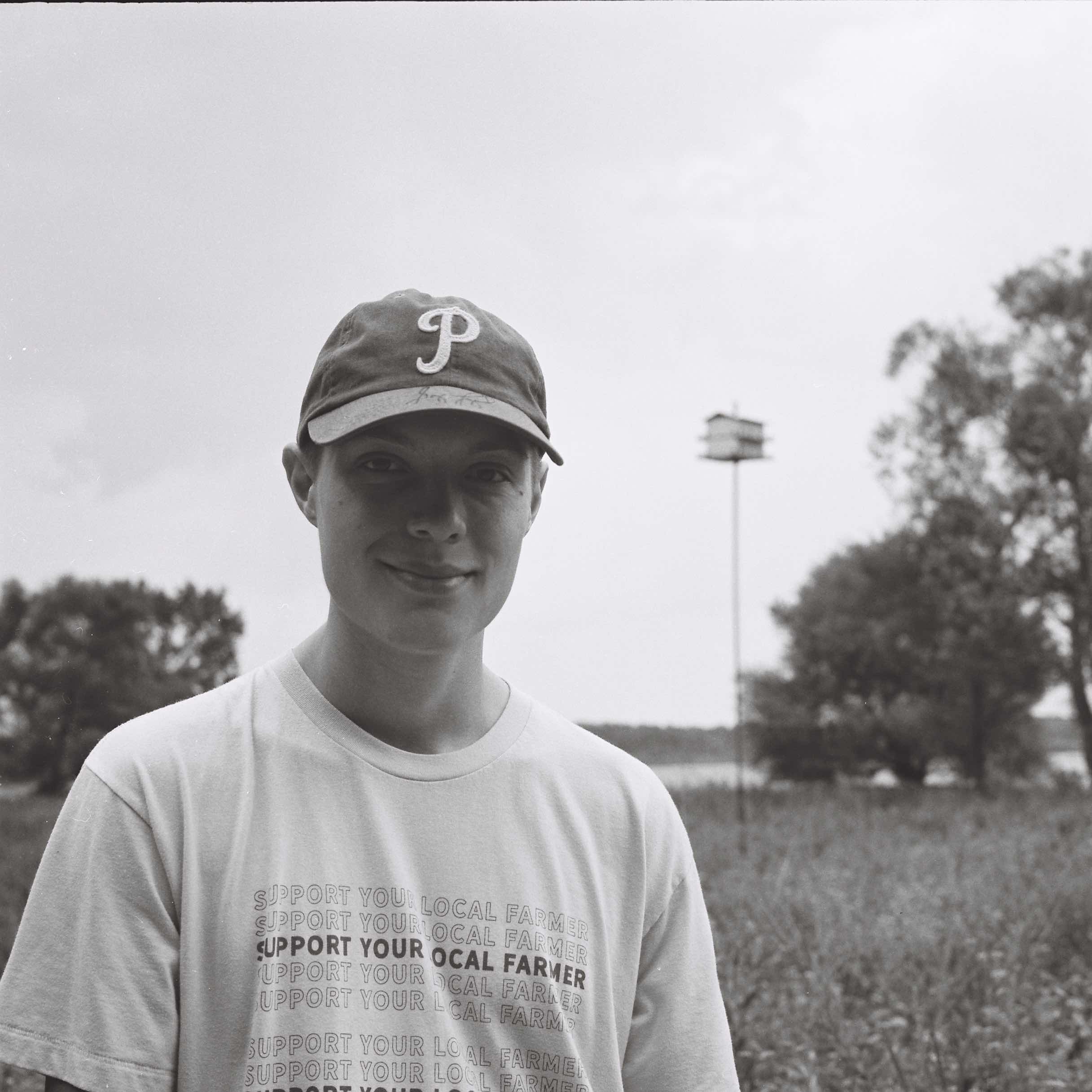 This week we talked about the recent paper Indices of Effect Existence and Significance in the Bayesian Framework by Dominique Makowski, Mattan S. Ben-Shachar, S. H. Annabel Chen, and Daniel Lüdecke, which is a fantastic reference for deciding how to test your hypotheses with Bayesian statistics. This post is a summary of the paper, which I definitely recommend to anyone venturing into Bayesian statistics.

If you already know what most of these things are and you want to know how to compute them in R, check out the bayestestR package, spearheaded by the same team.

In Frequentist statistics, we try to estimate a single parameter value that makes the data most likely (i.e., we look for a Maximum Likelihood Estimate). In this view, the data are random, but the effects are fixed in that we assume there is a single “correct” value that we’re looking for. To test hypotheses in this framework, researchers most often use Null Hypothesis Significance Testing (NHST), in which they calculate a p-value, and reject the null hypothesis if this value is small enough. NHST is widely used because it is easy to perform, controls for type 1 error rates, and supposedly gives you a clear-cut answer to your research question given the data. However, Frequentist NHST has four major problems: (a) it never allows you to accept the null hypothesis (you can only reject it), (b) it places emphasis on effect significance, not effect size, (c) it relies on an arbitrary threshold for significance, and as a result, (d) it is associated with problems like p-hacking, publication bias, and the replicability crisis.

To remedy some of these issues, many researchers are now moving to Bayesian statistics, where we estimate a full distribution of possible parameter values (i.e., a posterior) in contrast to just a single value. I won’t cover Bayesian statistics here, but check out this post for a refresher. One particular advantage of Bayesian statistics is that there are many ways of quantifying the size or importance of an effect, so we aren’t just stuck with p-values. But this blessing is also a curse: since we have so many different metrics of significance, there is little agreement about which metrics are best for which purposes, and this confusion can be a major hurdle for anyone trying to learn Bayesian statistics for themselves.

This paper is geared toward solving this problem: by testing a bunch of these metrics under a range of conditions, we can see what properties they have, and decide when to use them. In particular, the authors simulate linear and logistic regressions, calculate indices of significance, and compare them to each other.

Before talking about the simulations themselves, let’s introduce the indices of significance that the authors tested, summarized in this figure:

As I mentioned before, the Frequentist p-value is what researchers typically use to test hypotheses in psychology and neuroscience. The p-value is the probability \(P(\lvert\theta\rvert \ge \lvert\hat{\theta}\rvert \; | \; \mathcal{H}_0, \mathcal{I})\) that we would observe an statistic \(\theta\) as big as the one we observed \(\hat{\theta}\), given that the null hypothesis \(\mathcal{H}_0\) is true and given our testing and stopping intentions \(\mathcal{I}\) (e.g., the intention to collect 50 data points and to run a single statistical test). There are a couple things to note here. First, since the p-value assumes the null hypothesis, it can not be interpreted as the probability that the null hypothesis is correct. So even if \(p = 1\), you cannot accept the null hypothesis. Second, since it assumes a set of testing and stopping intentions, you (as a researcher) are obligated to follow those intentions. So no optional stopping, p-hacking, or anything like that. Finally, p-values do not tell us anything about the size of an effect, only about our certainty that the effect exists.

The Region of Practical Equivalence assumes that there is a range of parameter values (called the ROPE) that are so small, they might as well be considered as practically equivalent to zero. To define this range, it is common to use a standardized effect size of [-.1, .1], which is usually considered a negligible effect size. Once we have the ROPE, we can simply check how much of the posterior lies within that range: ROPE (full) = \(P(-ROPE \le \theta \le ROPE)\). When this probability is 0, we can say that the effect is significant (since the parameter lies entirely outside of the null region). When it is 1, we can say that the parameter is practically equivalent to 0 (since all of the posterior lies inside the null region).

Some argue that this over-weights parameter values that are extremely unlikely, and so we should exclude them from this proportion. To do so, we simply condition that the parameter lies within some highest density interval (HDI), such as the 95% HDI: ROPE (HDI) = \(P(-ROPE \le \theta \le ROPE \; | \; lowerHDI \le \theta \le upperHDI)\). Both versions are essentially the same, but ROPE (full) considers the entire posterior, whereas ROPE (HDI) considers only the most probable values. This has the effect of making the ROPE values more robust at the cost of being less sensitive, where choosing an HDI close to 100% prefers sensitivity and choosing smaller HDIs favors robustness.

When we want to compare two hypotheses \(\mathcal{H}_0\) and \(\mathcal{H}_a\), we can just take the ratio of their posterior probabilities, known as the posterior odds (note that the \(P(\mathcal{D})\)s cancel out):

As you can see below, the measures exhibit two overall patterns.

The Frequentist p-value, pd, and p-MAP all indicate increasing significance with increasing sample size when there truly is an effect to be detected. However, when the null hypothesis is true, these measures show no relationship with sample size.

On the other hand, both the ROPE and the BF seem to be influenced by sample size regardless of whether the null hypothesis is true or false. When the \(\mathcal{H}_0\) is true, they show a higher preference for the null over the alternate hypothesis with larger samples. In contrast, when the null is false, they show a greater preference for the alternative hypothesis with larger samples. There also doesn’t seem to be a big difference between the two ROPEs or between the two BFs.

As you can probably tell at this point, pd and p-MAP are strongly related to the Frequentist p-value, whereas the ROPE and BF are not trivially related to the p-value. While p-MAP has a curvilinear relationship to the p-value, pd is approximately linearly related through the following formula: \(p_{two-tailed} = 2(1 - pd)\). This implies that pd is probably a nice thing to report to the pesky reviewer demanding p-values. 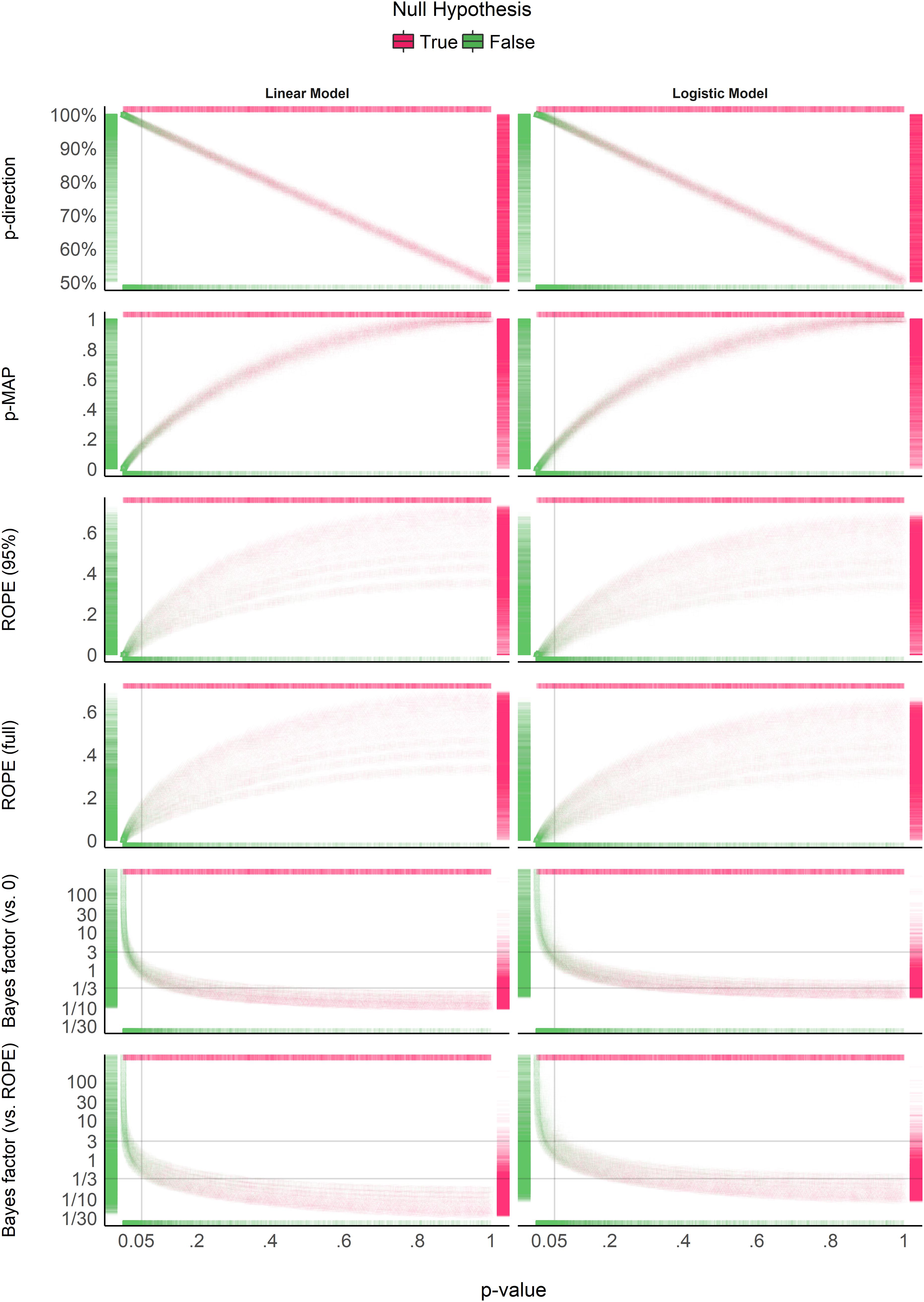 Relationship Between ROPE (full), pd, and BF (vs. ROPE)

Finally, the authors investigated the relationships between the BF, the ROPE, and pd (which as we saw directly corresponds to p-values). The left two plots show that both the BF and the ROPE are related to pd, but these relationships are modulated by sample size. On the right, we can see that the BF and ROPE measures are directly related, but that this relationship depends on the type of the model being tested (linear or logistic).

Overall, the authors concluded that it seems like these measures break down into two families, which each indicate separate things.

Because of this division, the authors recommend adopting an existence-significance framework in which you interpret the measures accordingly.

The tldr version of this post is that some measures (p, pd, and p-MAP) indicate the existence of an effect and others (BF, ROPE) the significance. So, it’s best to report (at least) one measure from each category. In terms of existence, pd is probably the best measure to report because it’s easy to interpret and because it directly corresponds to the well-known but misunderstood p-value. To report significance, the authors recommend using BF (vs ROPE) when you have informative priors (since the BF is influenced by prior information), and to use the ROPE (full) when you don’t (since the ROPE is pretty much constant under any not-super-informative prior). Of course none of these measures are perfect or good for everything, so you consult the table below for a nice summary.

I found this paper to be incredibly useful in reporting my own analyses and interpreting my results. If you’re relatively new to Bayesian stats, hopefully this encouraged you to try it out! 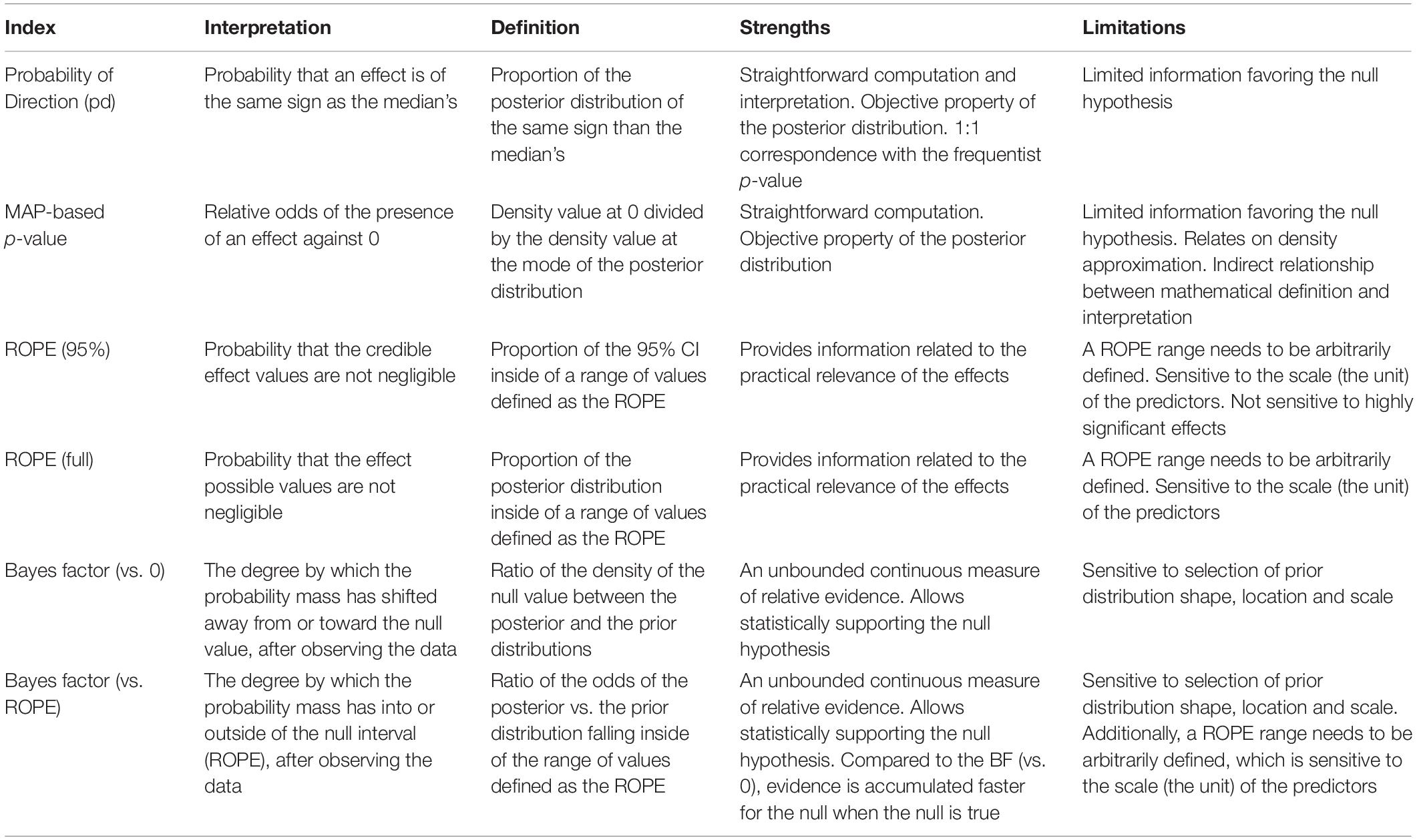 « How To Build a Free Academic Website ggplot2 workshop »